After a (fairly) late night at the Laoshe Teahouse, I slept in (after waking for a couple hours at 3 AM) and took it easy in the morning. Robert and I had lunch with a couple of his friends here. The food (vegetarian) was delicious. After lunch we headed down to Lama Temple, a working Buddhist Temple that is open to tourists. We took the subway (we have only taken two trips by taxi since I arrived) on several of the shiny new lines installed before the Beijing Olympics. The trains are equipped with a cool dynamic map that shows which stop you are headed towards with colored lights (red is stops you have passed, blue is stops along your destination path)
(click on photos to see enlarged version) 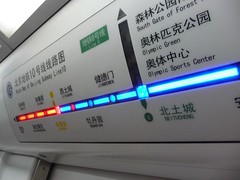 Once we got to the Lama Temple we met up with Robert’s friend, Vivian, who is a native Beijinger. Vivian speaks fluent English as well as Japanese and is learning French 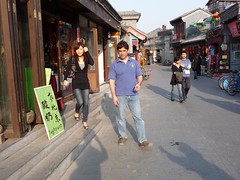 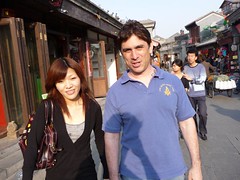 We looked around the temple, which struck me as very different than Buddhist temples in Thailand. The temples in Thailand are ridiculously ornate, every surface covered with pictures and bas-relief. The Lama Temple was more subdued, although the Buddha statues were all gold: 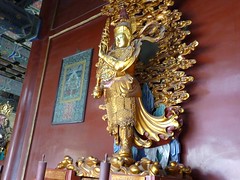 There was one structure that held a giant turtle statue with a pillar on his back. I am not the significance of the statue, but it was interesting because it was crammed into the structure, making it difficult to even get a clear shot of it:

Perhaps it represents turtles all the way down.

The temple has a unique history, having been created as a home for court eunuchs in the early 1700’s. Eventually it was converted to a prince’s home. Later it became a “lamasery” devoted to Tibetan Buddhist Monks. The structure was protected by the Prime Minister during the Cultural Revolution, and that is why it survives today. It was reopened as a monastery in 1981, and is one of the most important Tibetan monasteries in the world.

After the Lama temple we took a bus to a shopping area which I think is called Hou Hai. The shops surround a large lake and it is very tranquil (by Beijing standards). It’s the same place where Robert went ice skating in the Winter. On our way to Hou Hai we noticed a man flying a kite, which, according to Vivian, was on over 800 meters of string! I zoomed in as far as possible with my camera (10x) and you can see just how small the kite still appears: 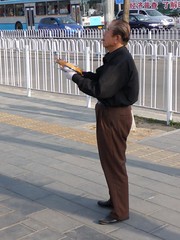 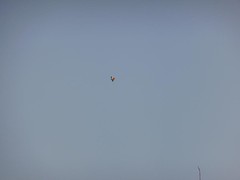 We wandered around the lake for at least an hour or more. 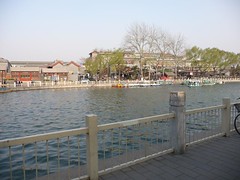 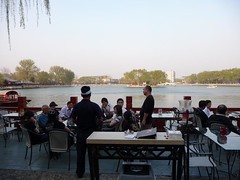 We also stopped into a Starbucks for a break (where can’t you find a Starbuck’s anymore?).

This is for my daughter, Anna. As we walked along a side street we saw a little bunny in a cage. Vivian and Robert went to say hello: 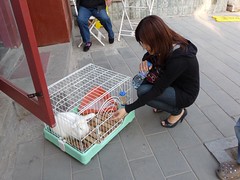 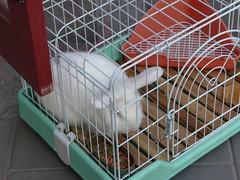 Then it was back on the subway to pick up our bikes for a speedy night-time ride through Beijing (no photos or video of that, I did not want to crash)!

Tomorrow (Friday) will be devoted to shopping for gifts and Saturday is a trip to the Great Wall of China. Here are the rest of the pictures from today: