The Great Wall is certainly the most famous tourist attraction in Asia and it is a short drive from Beijing, so I knew we needed to see it during my stay here. Robert arranged a car to take us to the site and we went with a family that Robert knows from work. Roger, Tina and their daughter Samantha have been in China for about 6 months but Tina and Samantha had yet to see the Great Wall. We piled into the car (with Samantha on her parents’ laps) and headed out to the country.

Right after getting in the car I realized I had forgotten to put my battery in my camera! Fortunately Robert had brought two cameras (a pocket digital and a digital SLR), so we were covered. We climbed up into the mountains and after an hour and 45 minutes we arrived at Mutianyu, a section of the wall that is particularly well-preserved (and also restored in many parts). There were several options for getting up to the wall. The first was a enclosed tram which took you to the top. The second was an open tram. And the last choice (the one we took) was hiking up to the Wall. The first thing you learn about the Great Wall is that it is a well-established tourist trap, and that means “running the gauntlet” of stalls with tourist paraphernalia. 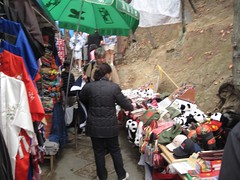 The second thing you discover about the Great Wall is that it is perched at the peak of the mountain chain, and that means a very steep hike to get up to the wall. 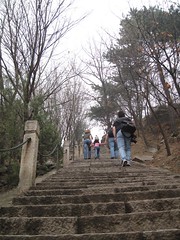 And the third thing that you learn is that the wall is, well, big. Great big, in fact. The only way to get a sense of it is to hike down it’s length for a bit, which was our plan after we managed to get to the wall. After climbing what seemed like 1000’s of steep stairs, we got our first glimpse of the Great Wall through the mist: 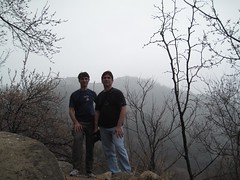 As you can see it was a particularly hazy day. I was not sure if it was just humidity or smoke from the coal plants or some combination, but it actually added quite a bit to the power of the Wall to see it appear magically from the mist 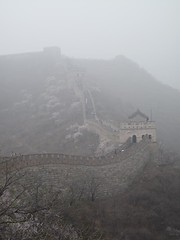 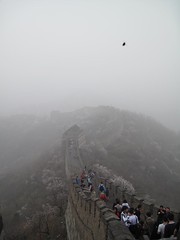 There are parts of the wall that are ridiculously steep, including places with steps that were 2 feet tall and 5 inches deep. The watchtowers were placed on a very regular basis in this section of the wall and we hiked through at least 6 of the towers. Eventually we found our way to the entrance of the aerial tram which was crowded with people. Many folks just take the tram to the top, hike for a couple hundred yards and then turn back. We decided to hike back to our original entrance although our legs were getting tired by now. 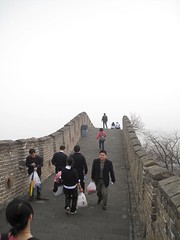 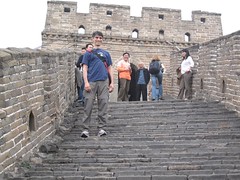 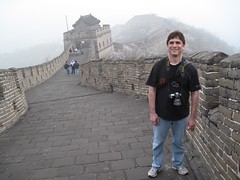 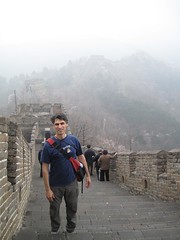 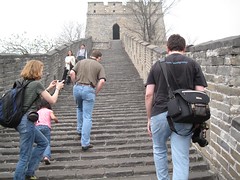 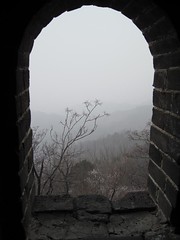 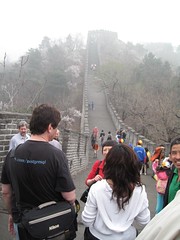 Then it was back into the car for a fast drive back into Beijing. I asked the driver to drop  me off at the subway station as we got closer to town: I had decided to take one last shot at getting some silk for Meta’s dresses. I had found out about two high-end silk shops right near the center of town and since it was only 4PM I thought it was worth a try. The first shop had a large selection and very good quality (I had a sample I was using for reference). The silk I was looking for was known as “charmeuse” and needed to be fairly heavy-weight. In addition Meta had given me some color ideas to choose from (mauve, seafoam, rust and turquoise). I found the two stores and went back and forth between them comparing products: 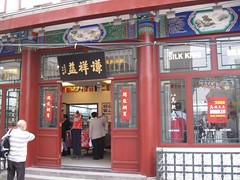 The color choices were fairly random, but the prices were consistent (and fairly high). There is not the option of bargaining much in these sorts of shops, so I knew it was going to cost to get the right stuff. But the reason I was trying to buy this silk was not just about price: it is impossible to find heavy charmeuse in the US, especially pre-dyed fabric. Here are some of the colors I had to choose from: 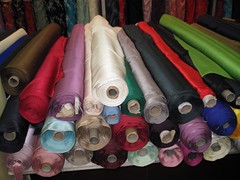 It is a bit of a fool’s errand to send me shopping for fabrics, but I did my best. In the end I picked up two 5 meter lengths, one of mauve and one of rust. Or at least they looked like mauve and rust to me, but like I said, fool’s errand. Now the hard part will be finding seamstress back home that can handle dress-making with pure silk.

I made my way home, happy with the fact that I had managed to get the silk. I took the subway and then picked up Robert’s second bike near the station. The ride home was crowded with rush-hour bike traffic (even on a Saturday) and I noticed several tricycles carrying large loads. It is pretty amazing just how big a load some of these guys (and gals) can carry on their bikes: 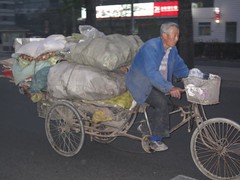 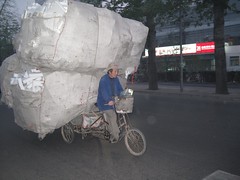 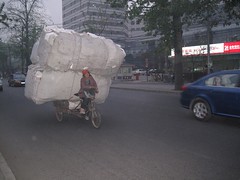 After seeing The Great Wall, Tienanmen Square and The Forbidden City I was starting to realize that the Chinese do big things quite well. I am considering using the phrase “China Big” instead of “Texas Big” from now on, but I think it will lose something in the translation.

That was pretty much it for my last full day in China. Tomorrow I will head to the airport and head out by Noon. I will arrive back in San Francisco at 8:30 AM or so. Crossing the date line in this direction allows you to perform a time traveling trick of arriving before you leave.

A full slideshow of the day’s pictures: